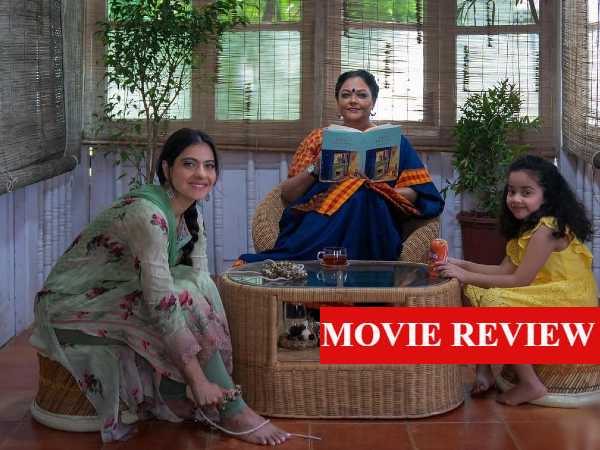 The story of Tribhanga revolves between the past and the present. Writer Milan (Kunal Kapur Roy) interviews his idol writer Nayantara Apte (Tanvi Azmi) for her biography. Apart from her unwavering passion for writing, Nayanthara also brings to Milan several personal events in her life – her broken marriages and its impact on her children (Kajol and Vaibhav Tatvvadi).

Anuradha (Kajol) becomes a well known Odissi dancer and famous actress. She is a single mother who considers marriage as ‘Social Terrorism’. Like her mother, she is also a woman living on her own terms. She says what she thinks is right, she does what she does. His daughter is Masha (Mithila Palkar), who has her own experiences. Perhaps surrounded by society’s expectations. I want a ‘normal’ family, she says.

Talking about her biography, Nayantaya tells Milan- “There is so much love between my children and such a big gap between them and me. Sometimes I wish these were my characters, then I would take them in the direction I wanted. And Then he would love me.” The pain of his voice comes down in one word.

How did it go wrong?

While working on the biography, Nayantara suffers a brain stroke, and she falls into a coma. This incident forces Anuradha to reconnect with her past.. and she introspects about her equation and life with her mother. When, how, where do they go wrong despite having the freedom to make their own choices?

There are very few characters in the film, so every character makes room in your mind. From Tanvi Azmi, Kunal Roy Kapur to Kajol, Mithila… every artist has shown in his own rhythm from beginning to end. Kajol is over-loud in some scenes, but that was probably the demand of her character. His scenes with Tanvi Azmi are very effective. You want to see more of them on screen. Kunal Kapoor Roy, Kanwaljit Singh, Vaibhav Tatvvadi, Manav Gohil, who became a pure Hindi speaking writer, have done justice to their characters.

This is Renuka Shahane’s first Hindi film as a director. Nowadays, the trend of women telling women’s stories is being seen a lot. Perhaps that is why in Tribhanga also some such sentiments, some such strings of the heart have been teased, which have not been seen much in Bollywood films. This story of understanding each other’s mistakes, supporting them as well as choosing their different paths has been brought to the screen.

The film does not deviate from the subject even for a minute. The director has also touched sensitively on topics like social prejudice about women, domestic violence, physical abuse in the family. ‘Tribhang’ is just one and a half hours long and this goes in favor of the film.

The film’s starcast, direction and writing are its strong points. Some of Tanvi Azmi’s dialogues are heart touching. Her character may not be flawless, but Nayantara is not hated. The life of these three women, divided between talent, stubbornness, tradition, does not seem boring anywhere on the screen. The work of the film’s editor Zabeen Merchant is also commendable.

With the kind of emotion the film captures, in some scenes the sense of silence rather than the words could have sounded more impressive. But she is missing there. Maybe that’s why the film doesn’t leave an impact long after it’s over, despite being associated with the story.

The deteriorating relationship between three women more than mother-daughter, this story must be seen once. Director Renuka Shahane has given an important place to the issues as well as the emotions in ‘Tribhang’ and the same thing touches the heart. 3.5 stars to the film from Filmybeat.