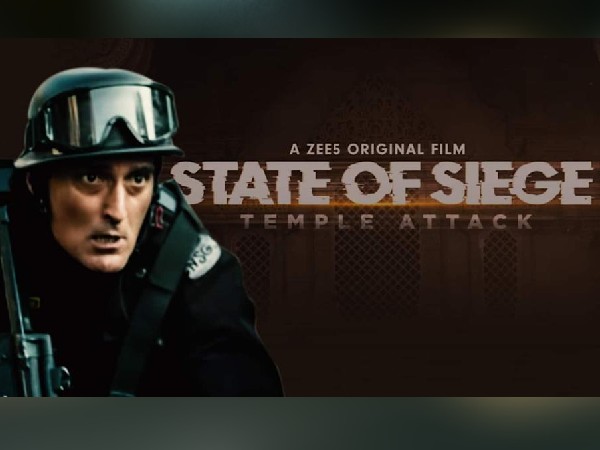 ‘State of Siege: Temple Attack’ review – The pain of Akshardham attack and the might of NSG, Akshay Khanna looked strong

The film ‘State of Siege: Temple Attack’ stars Akshaye Khanna, Vivek Dahiya, Gautam Rode, Akshay Oberoi in the role of NSG commandos. At the same time, actor Sameer Soni is in the role of Gujarat CM. There are 4 attackers in the film, played by Abhilash Choudhary, Dhanveer Singh, Mridul Das and Mihir Ahuja.

“Sir aap toh mujhe marwa hi denge” were the last smiling words of Captain Vivek (Akshay Oberoi) as he says to Major Hanot Singh. Little did he know that he would fall victim to the bullets of the terrorists the very next minute. These few words have a great impact on Hanot Singh and his failure has been coming to the fore again and again. While serving in NSG, Hanot Singh is given the responsibility of protecting the next mission Gujarat CM. On the other hand, in the name of avenging the Gujarat riots, terrorists attack the Krishnadham temple in Gujarat.

It will take 4 hours for the entire NSG team to reach Gujarat, due to which the film’s hero Major Hanot Singh (Akshay Khanna) arrives to handle the temple attack situation with a team of only 6-8 people. Here too, Major Hanot fails in the beginning and then Major Samar (Gautam Rode) is given the responsibility of this mission. The story is woven around how Major Hanot returns to this mission and how this mission is made a success.

Ken Ghosh has directed many films including ‘Ishq Vishk’, ‘Fida’, XXX, ‘Chance Pe Dance’. For the first time, we have brought a film inspired by the true story. Earlier, his film ‘Abhay’ with Kunal Khemu was released which got a decent response. This time ‘State of Siege: Temple Attack’ will also not disappoint the audience. The plot of the film is interesting. All the characters and the story proved to be perfect to narrate the terrorist incident. But the character of Akshaye Khanna brings ups and downs in the film. This is why the film was focused more on the failure of a Major than the Temple Attack. But Akshaye Khanna played his role with utmost sincerity, which handles this film.

The film was mainly related to the terrorist attack, in this film Abhilash Chaudhary, Dhanvir Singh, Mridul Das and Mihir Ahuja were seen in the role of terrorists. All four did a strong acting. At the same time, the character of Gautam Rode and Vivek Dahiya in the film also manages to handle the film. When it comes to the performance of Akshaye Khanna, the audience has seen him in uniform after years. Akshay Kumar of ‘Border’ remembers watching this film again and again. The age marks may have increased but Akshaye Khanna did not let it affect the character. Excellent efforts by Akshaye Khanna save this film.

To a large extent, this film is good and it is also entertaining. Also Akshaye Khanna, Vivek Dahiya, Gautam Rode, Abhilash Chaudhary these actors have done justice to their characters. The focus of the entire film is on Major Hanot Singh i.e. Akshaye Khanna. The weak side is the writing of the film. The film could have been made stronger. The fight scenes of the film are also very weak.

If you are a fan of Akshaye Khanna then definitely watch this movie. At the same time, if you like watching movies inspired by true events, then you can still watch it. But it will disappoint you in terms of action. 2.5 stars for ‘State of Siege: Temple Attack’ from Filmibeat.