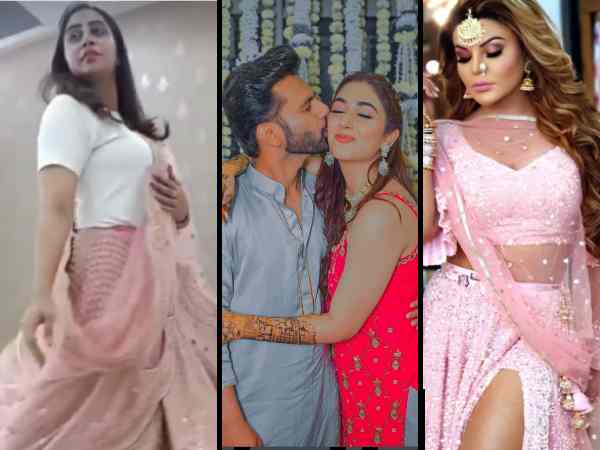 Ali Goni and Jasmin Bhasin are very excited for this marriage. Significantly, the friendship of Ali and Rahul Vaidya had become an example in the Bigg Boss house. Rahul Vaidya also wrote a love song for Ali and Jasmine along with Rakhi Sawant at home, which was later completed and recorded and released by Rahul.

the chuda ceremony is over

Disha Parmar’s Chuda ceremony has been done only after her turmeric. After completing it, Disha Parmar was seen rehearsing her dance with Rahul Vaidya late at night. Disha and Rahul’s love story was official on Bigg Boss. Before this, both used to call each other as friends. But Rahul proposed Disha on National TV.

Rahul Vaidya admiring Disha’s mehendi with love. It is worth noting that after leaving the Bigg Boss house, Rahul Vaidya once again took Disha to the heights of the sky in a helicopter to give a romantic proposal. Disha and Rahul have known each other since 2017-18.

Fans are constantly sharing cute pictures of Rahul and Disha’s wedding on Twitter and sometimes on Instagram. As if waiting, just for the pictures of their wedding. We are sure that she too will go viral as soon as she comes out.

was a long distance

After leaving the Bigg Boss house, Rahul and Disha appeared together on several dates. But after that Disha had to part ways with Rahul when Rahul Vaidya went to Cape Town to shoot for Khatron Ke Khiladi. The costliest contestant of this show is Rahul Vaidya.

Another lovely picture of Disha Parmar from the Mehndi ceremony. Disha Parmar rose to fame on TV with the Star Plus serial Pyaar Ka Dard Hai Meetha Meetha Pyara Pyara. In this serial, she was seen romancing Nakuul Mehta. Rahul Vaidya, on the other hand, was the most talked about contestant of the country’s first singing reality show Indian Idol.

Rahul Vaidya released his wedding song Matthe Te Chamkaan even before taking seven rounds with Disha. Fans are very fond of this song. The song is recreated by Shreyas Puranik and sung by Aishwarya Bhandari with Rahul.

caught on cameras late at night