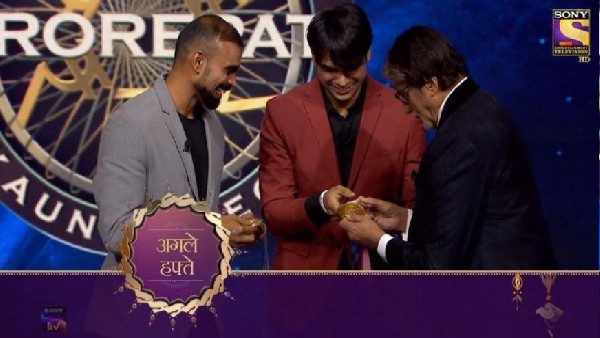 Neeraj Chopra will be seen in Kaun Banega Crorepati this week, will have a blast with Amitabh Bachchan!

Amitabh Bachchan’s show Kaun Banega Crorepati is being liked a lot and every week some big star becomes a part of this show. A woman recently won one crore rupees on this show of Amitabh Bachchan. But the news that is coming out at this time is being liked a lot. Actually the recent gold medalist is now going to be a part of this show. It is reported that Neeraj Chopra and Sreejesh are going to be seen sitting on the hot seat this week.

In the recently held Tokyo Olympics, Neeraj Chopra won the gold medal in javelin throw. He has become the first Indian to do so. This week Neeraj is going to be seen with the megastar of the century Amitabh Bachchan.

KBC season 13 is very much discussed and is being liked. Cricketers Sourav Ganguly and Virender Sehwag had recently come to this show and that show was very much liked.

Apart from this, actress Deepika Padukone and filmmaker choreographer Farah Khan also reached the show together. Amitabh Bachchan also did a lot of funny things during this time. We can call this season new because in the last season, the studio audience was not a part of the show and we saw a major change in ‘Life Line’ as well.

The studio audience is back with a new spirit this season and so is the lifeline – the audience poll. Amitabh Bachchan is constantly hosting this show. On the work front, she is also very busy with her upcoming films.

Athlete and Gold Medelist Neeraj Chopra will be the part of Kaun Banega Crorepati in this Week! Read the details.