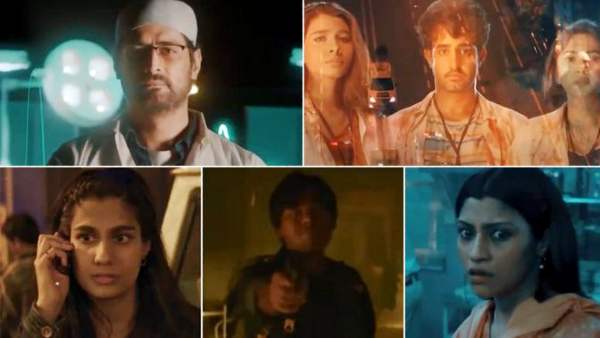 Hardly an Indian can forget the dreadful day of November 26, 2008. When ten Lashkar-e-Taiba terrorists from Pakistan reached Mumbai by sea and fired indiscriminately at different places. In which 166 people including 18 security personnel were killed. This incident shook the whole country along with Mumbai. While in many films we have seen different aspects related to this terrorist attack, but what kind of struggle the medical staff were going through at that time, what kind of struggle they were facing, we have not yet seen it. ‘Mumbai Diaries 26/11’ is a fictionalized account of the same events that happen that night in a government hospital.

This Amazon Prime Video series is more about the frontline workers than the terror attack, who stood by the last minute for every injured, every patient that night. The show begins with the terrorist attack on the Leopold Cafe on 26 November. A few hours earlier the same day, we meet the new junior doctors (Ahan Mirza, Dia Parekh and Sujata Ajawale) from Bombay General Hospital when they interview Dr Kaushik Oberoi (Mohit Raina) for a residency program. The series revolves around these doctors, including Dr Chitra Das (Konkona Sen Sharma), a social worker.

As hordes of people who were injured by bullets during the attack throng the hospital, we see each character’s back story along with flashbacks. Along with the external attack, how he is dealing with the tornadoes in his personal life is well shown. Some of the best characters are included as co-stars, which give a solid boost to the plot. At the same time, Bombay General Hospital is also shown as a character, which is a very old building but has stood strong in the face of many storms.. some like the system running there.

This eight-part series also covers a range of issues, be it discrimination against minorities, gender discrimination or tensions in the name of religion. The makers also touch upon the subject of domestic violence, mental health, but do not deviate from the original plot. The director has kept the drama full of drama along with a touch of truth in the story. This medical drama is a great thriller. The tales of the doctors’ personal lives in a tense turn of events seem a bit haphazard, but the series keeps them hooked till the end. Sanyukta Chawla Shaikh deserves praise for the excellent dialogues.

Talking about acting, Mohit Raina and Konkona Sen Sharma have found their characters wonderful. Every single expression on his face is so effective that he keeps you hooked. Apart from these two, the show also gives full opportunity to the rest of the characters to shine. Satyajit Dubey, Mrunmayee Deshpande and Natasha Bhardwaj leave strong impressions in their characters. At the same time, Shreya Dhanwantri, who became a journalist, attracts attention with her acting.

Mumbai Diaries 26/11 is one such show that has added the right amount of drama and thrill. This series is a must watch if you like dark thrillers, just remember that this is a fictional account and not a documentary.

Mumbai Diaries 26/11 Web Series Review: This show on Mumbai Attack is a must watch with Mohit Raina and Konkona Sen Sharma in top form.