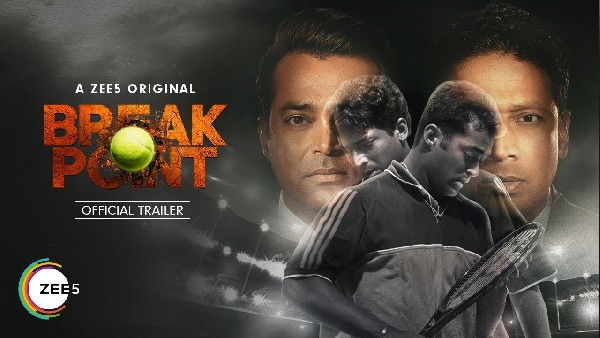 ZEE5 Original Series ‘Break Point’ is brought to you by noted filmmaker Ashwiny Iyer Tiwari and Nitesh Tiwari of Dangal, Chhichhore, Bareilly Ki Barfi and Panga. A seven-part series that will not only build on their epic tennis matches but also on And off court will also throw light on the relationship of both.

The trailer also features family and friends including tennis icons Sania Mirza, Bob Bryan, Mike Bryan, and the iconic partnership of Lee-Hash, which put Indian tennis on the world map in the late 1990s. The most dangerous couple was adjudged the pair. Nimisha Pandey, Head, Hindi Originals, ZEE5 says that we are extremely happy to unveil the first look of Breakpoint. It is a human story of a partnership, friendship and rivalry that has shaped the careers and lives of two of India’s greatest players.

Filmmakers Ashwiny Iyer Tiwari and Nitesh Tiwari, who are co-directing a project for the first time, say that both Leander and Mahesh are massive sports champions but, in this series, they are two friends who are opening their hearts. and are placing it in front of the world. We are honored to have the opportunity to tell their untold story, who will form a great partnership about dos and don’ts for the aspiring youth of our country.

It has been a unique experience to see myself on screen, says Leander Paes. I am glad that we are getting a chance to tell our story for the first time and hope that the audience will continue to appreciate our on-court partnership and post the break-up. Will respect our cause. * All partnerships go through ups and downs and so have ours, says Mahesh Bhupathi. While the world knows about our on-court partnerships, this is the first time they will get to know about our off-court lives and relationships.

‘Break Point’ is ZEE5’s first partnership with filmmakers Ashwiny Iyer Tiwari and Nitesh Tiwari under their banner Earthsky Productions. The 7-part series will premiere on ZEE5 on October 1 and will be available in English, Hindi, Tamil and Telugu.