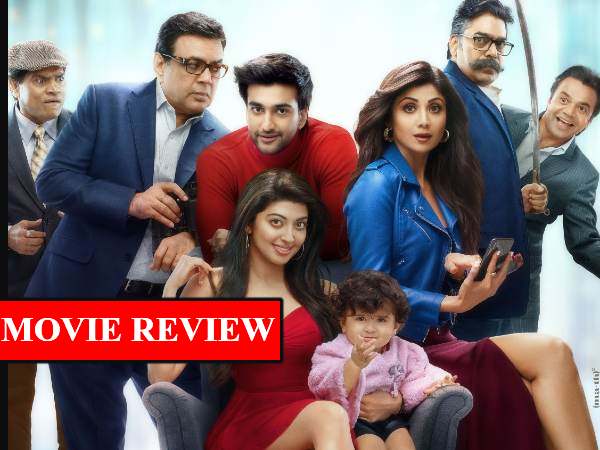 Akash (Meezaan Jaffrey) is all set to marry the daughter of Bajaj (Manoj Joshi), a friend of his father Kapoor’s (Ashutosh Rana). Distressed by both his sons and grandsons, Kapoor sahib takes a sigh of relief when suddenly a girl named Vaani (Pranita Subhash) comes to his doorstep with a baby girl in his arms. She claims that her son Akash Kapoor left her pregnant and that the baby is their son’s. Akash agrees that he knows Vaani. Both were in college together and then both fall in love. But he tells that one day Vani had left him suddenly and he has never even seen her after college, and this child is not his. Before Akash gets married to Bajaj’s daughter, the Kapoor family decides to get to the bottom of the matter and is supported by Anjali (Shilpa Shetty). Anjali is close to the Kapoor family, whom Kapoor sahib treats as a daughter. But Anjali’s suspicious husband Radhe Tiwari (Paresh Rawal) comes to know half-incomplete about the matter and starts believing that Anjali and Akash are having an affair. This is where the confusing story begins.

Priyadarshan’s comedy films have their own style, a formula. Even if he uses that formula in each of his films, there seems to be a newness to the story. But this is where Hungama 2 fails. Counting scenes throughout the film will bring a smile to your face. The entire film runs flat from beginning to end. Dialogue in such a way that you sit holding your head. Even he has failed to use his old favorite starcast (Paresh Rawal, Rajpal Yadav, Tiku Talsania) properly. Let me tell you, Hungama 2 is a remake of Priyadarshan’s Malayalam film Meennaram, in which Mohanlal played the main character.

The dialogues written by Anukalpa Goswami and Manisha Korde are extremely disappointing. Why abuses have been used so much in a comedy film, it is beyond comprehension. Where the work could have been done with gestures, the dialogues have also been inserted, so the film has become more than two and a half hours long. There is repetition in many scenes. The film’s editor M S Ayyapan Nair could have easily shortened the film to half an hour with scissors and the story could have been twisted a bit. At the same time, the weakest side of the film is the screenplay, which is written by Yunus Sajawal.

On the one hand, in Hungama 2, the familiar faces of Priyadarshan films like Paresh Rawal, Manoj Joshi, Tiku Talsania and Rajpal Yadav are seen. At the same time, new artists like Meezaan Jaffrey and Pranitha are also included. All these actors including Ashutosh Rana have tried to do justice to their character. But the script of the film is so weak that it does not leave any space for any artist. Some characters look like they have been kept just to fill the frame. Everyone shows up with the gestures shown by their old sight. Rajpal Yadav has been successful in laughing in a few scenes. However, Shilpa Shetty was excited about her comeback from this film. But his character in the film also leaves no impact.

Music of the film is composed by Anu Malik and lyricist is Sameer. Hungama Ho Gaya is the final song of the film in the voice of Mika Singh, which you can enjoy a little bit. Since the film has released on OTT, it is quite expected that you will want to forward all the songs of the film including the ‘Chura Ke Dil Mera’ remake.

Overall Hungama 2 breaks hearts. The 2003 film Hungama starring Akshaye Khanna, Aftab Shivdasani and Rimi Sen was a fun film and it is unnecessary to attribute it to a franchise. With its cliched story and characters, Hungama 2 has completely failed to make for a laugh. 1.5 stars to Hungama 2 from Filmibeat.