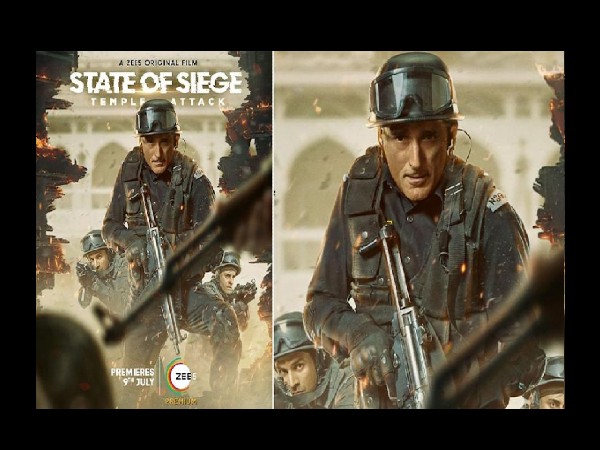 G5 State of Siege: 26/11 was a tribute to our brave Indian soldiers who laid down their lives for the nation during the 26/11 Mumbai attacks. After establishing a successful franchise, the platform is now gearing up to release the premiere of the second season State of Siege: Temple Attack (Original Film) starring Akshaye Khanna which will be simultaneously offered in Hindi, Tamil and Telugu.

The trailer begins with a contemptuous speech in the background, where 4 terrorists open fire while entering a temple. Then they hold many pilgrims/visitors hostage. Akshaye Khanna, who is making his digital debut, is seen playing the character of Major Hanut Singh, who hints at an incident that happened in the past and requests his senior to send him for an operation.

Director Ken Ghosh has said that with huge action sequences and remarkable dialogue delivery, the trailer is sure to give you goosebumps. This film is our tribute to NSG. This trailer will give you a glimpse of what to expect from this momentous film which salutes NSG for their bravery. It is full of action, emotion, suspense and thrill”, Nimisha Shared by Pandey, Head Hindi Originals, ZEE5.

Along with Akshaye Khanna, Vivek Dahiya and Gautam Rode will also be seen in a cameo with actor Akshay Oberoi playing the role of NSG commandos. Contiloe Pictures (Abhimanyu Singh), the dream team that produced State of Siege: 26/11, is back, which will be directed by Ken Ghosh, who also directed the hugely popular and successful Abhay 2. Lt Col (Retd) Sandeep Sen who was advisor to both the state siege projects. State of Siege: Temple Attack will premiere on 9th July on ZEE5.