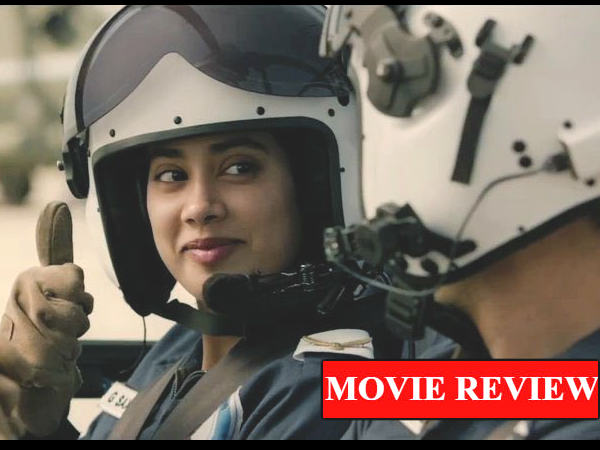 Gunjan Saxena (Jhanvi) of Lucknow has only one dream since childhood, to become a pilot. But initially it is given the name of childishness and later stubbornness because according to people “girls can’t become pilots”. From elder brother to Gunjan’s mother, he advises her to forget her dreams. Brother says – “The outside world is very different, Gunjan”.

But Gunjan’s dreams are supported by her retired colonel father (Pankaj Tripathi). Who never made any distinction between his son and daughter. One thing that makes Gunjan’s story special is her thinking. Who has never been trapped in gender discrimination. It must have been his father’s influence. She wanted to become a pilot since childhood and she became. Many in the social circle tried to underestimate him, some tried to push him back. But he only pursued his dreams..with all sincerity and passion.

Director Sharan Sharma has been successful in bringing on screen the dreams and struggles of India’s first female Airforce pilot. He has set a mood for the film right from the opening scene and he does not budge from it. The best thing about the film is that it does not make patriotic noise, but gives a feeling. Even the noisy background score has not been inserted for Gunjan, which came out in the Kargil war.

At the same time, apart from patriotism, the important thing that has been fabricated in the story is feminism. While not slipping from the mainstream, the director has expanded the scope of the story. Fighting with the conservative mindset of the society 20 years ago was no less than a battle. But the Gunjan of Lucknow broke from all these shackles and reached the heights of the sky. The dialogues of the film are strong and contemporary.

The film mainly showcases the unshakeable trust between Gunjan and her father. Jhanvi Kapoor and Pankaj Tripathi have done complete justice to their character. Both assure that no one could sit better than him in this character. 24 year old aspiring Gunjan Saxena and Janhvi turned Gunju to the family impresses in this film. The director has crafted his character with great care. In long dialogues, Jhanvi keeps losing her grip, but in serious and emotional scenes, she easily descends. Gunjan has a gleam in her eyes, playfulness, but also annoyance and resentment about the conservative mindset in her home, society, Airforce. Jhanvi has been successful in showing that. Angad Bedi and mother-turned-mother Ayesha Raza are also well suited for the role of a protective elder brother. At the same time, Vineet Kumar Singh, who became Wing Commander, may have been given a limited scope by the director, but he gets impressed in that too. Manav Vij also attracts attention in a small role.

The strongest aspect of the film is its screenplay. Written by Sharan Sharma and Nikhil Mehrotra, this biopic is very tight. The film is of just 1 hour 52 minutes and in this time the story does not deviate from the main sentiment anywhere. Nowadays there is a lot of tension in the country regarding nationalism. In such a situation, this film shows what true patriotism is. Since the story is related to the Kargil war, the film has excellent sequences like pilot training, aerial acrobatics, attack by helicopter, with Sharan Sharma assisted by renowned American aerial coder Marc Wolff. Arif Shaikh deserves praise for the effective editing.

There are 6 songs in the film. The music is composed by Amit Trivedi and the lyrics have been penned by Kausar Munir. The special thing is that all the songs are helpful in taking the story of the film forward. ‘Rekha O Rekha’ in Nakash Aziz’s voice is like a funny twist.. So ‘Bharat Ki Beti’ in Arijit Singh’s voice makes one feel proud.

A better film could not have been released than this on the occasion of Independence Day. ‘Gunjan Sharma – The Kargil Girl’ not by reciting the national anthem or Vande Mataram, or by showing the tricolor waving… but by honesty and devotion to create such a wonderful feeling of patriotism that will touch your heart. In our opinion, definitely watch this film, watch it with the whole family.