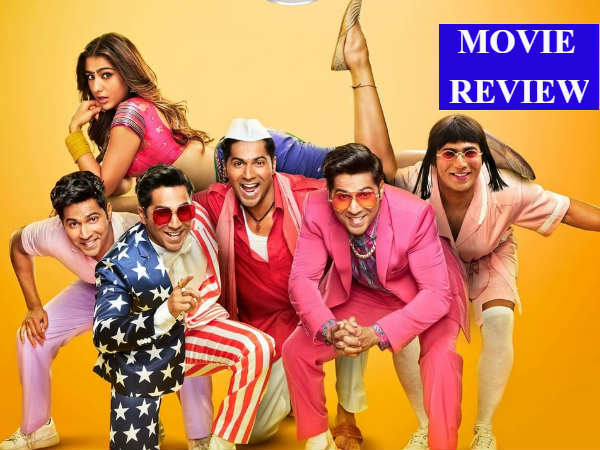 Goa’s rich businessman Rosario (Paresh Rawal) has only one dream.. that his two daughters get married to millionaire boys. Pandit Jai Kishan (Javed Jaffrey) comes up with a relationship for his daughter Sara (Sara Ali Khan), but gets humiliated in return. After being humiliated at the hands of Rosaria, Pandit Jai Kishan deceives Rosario’s daughter Sara into marriage with a porter named Raju (Varun Dhawan). In order to get married, Raju changes his name to become a millionaire Kunwar Mahendra Pratap Singh. But soon his reality comes in front of everyone. He then weaves another story – that of a twin brother. To save the marriage with Sara, he used to tell one lie to another, third to second.. But slowly the matter gets out of his hands and he gets into a big trouble.

In the 90s, this story seemed to have an association apart from entertainment. Even in 2020, it remains confined to 1995 itself. There are talks about Corona in the film, everyone is roaming around with smartphones.. In such a situation, it seems absurd that someone fools you so easily. Bollywood is slowly moving ahead with a comedy that makes fun of someone’s fatness, complexion or dress. But coolie number one is still stuck there. Obviously this is disappointing.

Someone else should remake your film and spoil it.. It is better to take up this responsibility yourself. Director David Dhawan is also doing something similar. First twin and now coolie number one. Every film has its time, its own mood. In such a situation, David Dhawan has not done justice to the remake of his own film. 1995 to 2020.. Considering the difference of 25 years, the film needed some changes but the script was completely ignored.

In the character of Raju / Kunwar Mahendra Pratap Singh, Varun Dhawan has tried his best to entertain. His comec timing is good. Barring a few scenes, he has also been successful in playing this character. There is an innocence in Varun even amidst the constant comparisons with Govinda, which is visible on screen. Perhaps this would be the reason why his father director David Dhawan did not give any other character a chance to emerge in the film. Paresh Rawal stuck in awkward dialogues, be it Sara Ali Khan who was mainly a part of only songs or Rajpal Yadav who turned maternal uncle.. Clearly none of the characters were tightly woven. Javed Jaffrey, Sahil Vaidya and Shikha Talsania have done justice to their minor characters and have been effective.

The film is quite average in technical terms. The VFX in some of the scenes is so childish, that you might be surprised. Especially when in a scene Varun Dhawan saves a child sitting on a railway track from a train. Ravi K Chandran’s cinematography also doesn’t save the film from average writing and direction. The dialogues of the film have been written by Farhad Samji.. Although most of the dialogues have been picked up from the previous film itself.

Talking about the songs, some of the chartbuster songs of 1995’s Coolie No. 1 have been recreated. The music is composed by Tanishk Bagchi. There are also three new songs, but none are effective, nor are they remembered after the film is over.

Varun Dhawan, Shikha Talsania, Javed Jaffrey, Rajpal Yadav have tried to play their characters with utmost sincerity. But the average direction and cliched dialogues make the film boring. Instead of the huge sets created for the songs, perhaps even 5 per cent of the attempt was made to make the film episodic, it could have been considered as masala entertainment.

If you’re a 90s kid, don’t take this risk. If you are a fan of Varun Dhawan and want to take a chance in the name of masala entertainment, then Coolie No. 1 can be seen. 1.5 stars to Coolie No 1 from Filmibeat.