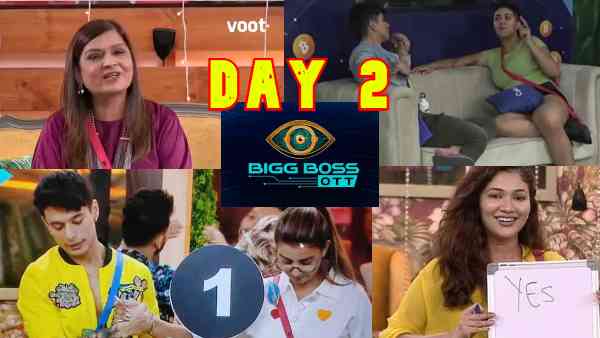 Most of the fights took place in Divya Agarwal’s house. Urfi Javed tries to convince them and says that Prateek worries for him a lot. But after hearing Urfi’s words, Divya got furious at Urfi itself. At the same time, Prateek’s partner, Akshara Singh also came to convince Divya but Divya rebuked him too.

Advice on choosing a friend

Divya advises to choose friends throughout the house. When her best friends Shamita Shetty and Riddhima Pandit were seen talking to Prateek Sahajpal, Divya was shocked and stopped talking to the whole house. This did not seem to make much difference to anyone and Divya could not take her own stand and for a while the talk seemed to mix with everyone.

There was an argument between Shamita Shetty and Prateek Sahajpal over utensils, after which this quarrel escalated. Shamita called Prateek a bad person. At the same time, Karan Nath and Rakesh Bapat were seen pacifying Shamita.

A day earlier, the quarrel between Moose and Akshara also appeared to be resolved. Moose apologizes to Akshara by clearing everything and Akshara also did not take a moment to leave the matter behind. There was a lot of debate between the two regarding food and abusive language, after which Akshara broke down and she started crying.

Seema Taparia entered the house and judged the contestants as a pair. Everyone was asked to rank their pair after which once again there was an argument between Prateek and the rest of the family. Prateek was not ready to give up the number 1 position while the family members believed that Neha and Milind are the best pair. No one reached a mutual agreement in this task.

Eventually, Seema Taparia, choosing the winner in the house, gave full numbers to the pair of Prateek and Akshara and gave them the first position. This was followed by Neha-Milind at number two, Riddhima-Karan at number three, Shamita-Rakesh at number four, Moose-Nishant at number five and Urfi and Zeeshan at number five.

In the house, Divya and Karan believe that Nishant is Kansa Mama of this house. When they hatch a conspiracy, Prateek comes in his Duryodhana avatar and fights with the whole house. The rest of the participants also believe that Nishant calmly accompanies Prateek in the fights and gets sidelined.

new couple is being formed

All eyes are on Prateik and Muskaan’s friendship in the house. Neha advises that this friendship should go ahead so that Prateek is happy and fights a little less with the rest. Apart from Prateek and Muskaan, Milind and Akshara’s new friendship is also being liked by the fans.

After the announcement of Seema Taparia, Prateek and Akshara have become the first captains of the house. Both have been entrusted with the responsibility of running the house this week by Bigg Boss. Apart from this, a report card meter has also been installed in the house which will tell daily how everyone has performed and how much the audience has been entertained.