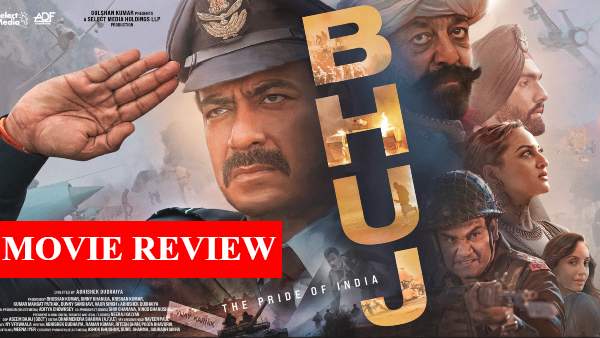 The film begins on 8 December 1971, when Pakistan Air Force jets continuously bombed the Indian Air Force airstrip in Bhuj. In the midst of massive devastation, Bhuj Airport in-charge Vijay Karnik (Ajay Devgan) confronts enemies while trying to deal with the situation. The story goes back a week and it is said that India helped East Pakistan (now Bangladesh) to come out of its oppression by West Pakistan (Pak). Due to which the Indo-Pakistan war broke out in December 1971. To weaken India’s position in East Pakistan, Pakistan attacked the western regions of India. He wanted to capture Bhuj. Various Indian airports were bombed as part of the strategy. Bhuj airbase was one of the major area of ​​Indian Air Force where Pakistan caused heavy destruction.

The Indian Air Force was expected to restore the airstrip from the Border Security Force, but it could not happen because at the same time Pakistan had also waged war in Longewala. Meanwhile, 300 villagers from Bhuj’s Madhapur—mostly women—decided to step into the defense of the country by repairing the damaged airbase within 72 hours. played an important role.

Ajay Devgan could have proved to be very strong in the role of Vijay Karnik, but he has missed out on some scenes this time. The director could not use Ajay Devgan’s gesture here at all. And the same is the case with almost all artists. Sonakshi Sinha, Sanjay Dutt, Amy Work’s character structure is so weak that the actors didn’t see much scope. Sharad Kelkar looks good in his small character. At the same time, as an Indian spy, Nora Fatehi has done justice with her action sequence.

Abhishek Dudhaiya has not only directed the film but also wrote the screenplay. Both of these are the weakest sides of the film. There is no rhythm in the film from the first scene to the last scene. The story runs in minutes, sometimes here, sometimes there. At the same time, the structure of all the characters is also very weak. There doesn’t seem to be any coordination. The repetition of scenes, repetition of dialogues, from forced songs to sloganeering in the name of patriotism is boring. This war based film seems to fail to bind from the very beginning. It is disheartening to see such a true phenomenon being tampered with in the name of creative freedom.

The dialogues of the film are written by Manoj Muntashir, which does not show any novelty at all. It would not be wrong to say that sloganeering is heard in the film more than the dialogues. Describing Sonakshi Sinha in one scene, Ajay Devgn says- “From a broken shirt button to a broken guts, a woman can add anything”.

Aseem Bajaj’s cinematography is extremely average. At the same time, Dharmendra Sharma has left the film quite lax in terms of editing. Many repeat dialogues, many repeat scenes. Wonder how the editor passed it in Final Cut! Lots of VFX has been used in the film, but that too is average and doesn’t create any excitement.

Three songs have been included in the film and all three do not fit with the story. The romantic track filmed between Ajay Devgn and Pranitha Subhash seems to be forcefully Dhunsa Gaya. The music of the film is given by Tanishk Bagchi, Gaurav Dasgupta and Arko.

Many films have been made in Bollywood related to patriotism and war and if the list of the weakest films is made among them, then ‘Bhuj The Pride of India’ will definitely be included. Actors like Ajay Devgan, Sanjay Dutt, Sonakshi Sinha, Sharad Kelkar also looked very weak in the acting side. Direction, acting, action, screenplay, cinematography, the film proves to be a very weak film in every respect. 1.5 stars for ‘Bhuj’ from Filmbeat.