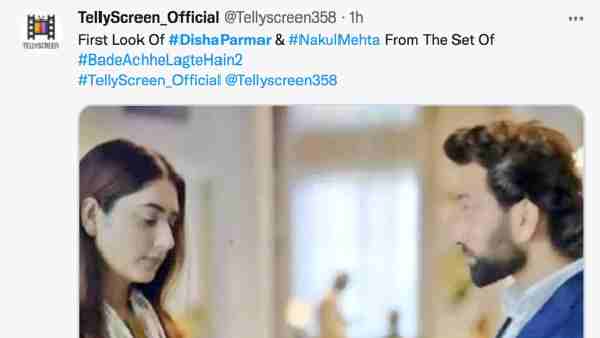 Nakuul Mehta and Disha Parmar have previously appeared in the Star Plus serial Pyaar Ka Dard Hai Meethi Meetha Pyara Pyara. In this serial, both of them become friends of each other in spite of a mismatched and dysfunctional marriage and then this friendship starts to turn into love. Their chemistry was very much liked by the audience.

Pyaar Ka Dard Hai Meetha Meetha Pyara Pyaara aired 663 episodes from 2012 to 2014. During this, the pair of Aditya and Pankhuri became the favorite pair of fans. Both were liked so much together that there was a demand for the sequel of this serial too.

Nakuul Mehta and Disha Parmar, after this appeared in many different serials. While Nakuul Mehta was seen winning hearts as Shivaay Singh Oberoi in Ishqbaaaz on Star Plus itself, Disha Parmar was also seen romancing Sudeep Sahir in Zee TV’s Woh Apna Sa.

Meanwhile, Nakuul Mehta and Disha Parmar have moved on in their personal lives as well. Nakuul Mehta married his friend and girlfriend Janki Mehta, while Disha Parmar has recently tied the knot with singing superstar Rahul Vaidya. The two are returning together after eight years. Nakul and Disha are very good friends and their Instagram is proof of that.

Divyanka Tripathi got the offer

When the casting of Bade Achhe Lagte Hain started, Divyanka Tripathi was first approached for this serial. Divyanka had rejected this offer but the serial team wanted Divyanka to think about this offer. Although Divyanka’s family was also not in favor of this serial.