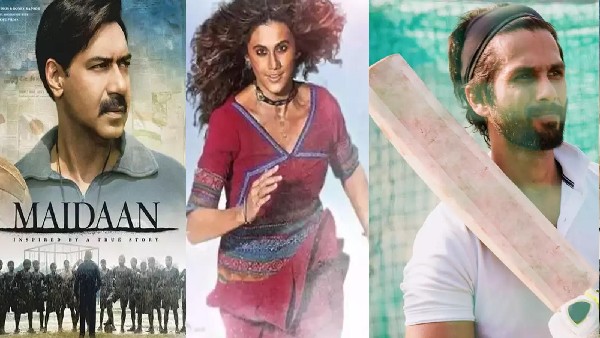 Shahid Kapoor will once again be seen in the Hindi version of the Telugu film. Shahid Kapoor will be seen in Jersey after doing Kabir Singh, the Hindi remake of Arjun Reddy. Shahid Kapoor will play the role of a retired cricketer in this film. At present, its release has been kept as Diwali 2021. In view of Corona, whether there is a change in its release date or not, information has not come yet. Mrunal Thakur is also in this film. This story is about a failed cricketer named Arjun. Joe returns to the game again to fulfill his son’s wish. It is directed by Gowtham Tinnanuri.

Ajay Devgan will be seen playing football. The film is based on football player Syed Abdul Rahim. Football is featured in a prime time period. Ajay Devgn is playing the role of Syed Abdul Rahim. Along with Ajay Devgan, Priyamani, Gajraj Rao, Boman Irani will also be seen in this film. The film may release on OTT. Makers are waiting for the cinema hall to open.

Taapsee Pannoorashmi is taking up the responsibility of the entire film in Rocket. Rashmi Rocket is going to prove to be another big film of Taapsee Pannu’s career. The film is directed by Srijit Mukherjee. Taapsee Pannu has also taken athletic level training for this film. Shooting is done. It is being told that Taapsee is going to surprise everyone with her look in this film. Also the hard work done on his body will also be the USP of the film. Its release date can be announced soon amidst the wait for the theaters to open completely. The film may release by the end of this year. Taapsee Pannu is going to do another sports drama film after this which will be the biopic Shabaas Mithu.

South superstar Vijay Deverakonda is going to debut in Bollywood with Ligar. Ananya Pandey will also be seen in Liger along with Vijay Deverakonda. After the release of the poster of the film, the enthusiasm of the fans is sky high. Karan Johar is producing this film. Puri Jagannath is directing the film. The film will be released in five languages ​​i.e. Hindi, Telugu, Tamil, Kannada, Malayalam. This is the story of a boxer. Ligar means a combination of Lion and Tiger, from this you can understand what the level of the film is going to be. This film can be announced for release by the end of the year 2021 or by 2022.

Ranveer Singh’s 83 is completely ready. The film, which released last year, is set for release this year. The film is based on World Cup winner India’s 1983 World Cup. Deepika Padukone is also in the film. Ranveer Singh is playing the role of Kapil Dev, the popular former cricketer and captain of India. The film is directed by Kabir Khan. For this, Kabir Khan is waiting for the theaters to open. Which now seems to be possible.