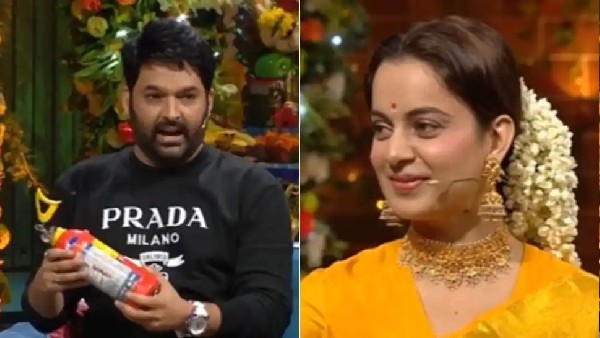 Afraid of Kangana Ranaut’s security, Kapil Sharma asked- There was no controversy for so many days Video

Kapil Sharma told the beautiful Kangana Ranaut in a silk sari that when you were about to come, a lot of security came before you. We were scared what we said. Well, what if you have to keep so much security? Kangana Ranaut, while answering this question in her sharp style, said something like this that Kapil Sharma stopped speaking. Kangana Ranaut replied saying that nothing, just the truth has to be told.

After this, Kapil asks Kangana how is it feeling, it has been so many days. There was no controversy. Kangana Ranaut laughs at this question of Kapil Sharma. You will have to watch the entire episode to see what will happen to Kangana on this. After this, Krishna Abhishek also appears in his role in another video. Krushna Abhishek also tells Kangana that this man broke my parlor ma’am, today when your thing breaks, you know very well what is the feeling from inside.

Hearing this, Kangana Ranaut laughs again. It is clear that Krushna Abhishek is seen here making fun of Kangana Ranaut’s controversy over the vandalism of her Mumbai office by BMC. Let us tell you that The Kapil Sharma Show has started making a place in TRP again with the return. On the other hand, Kangana Ranaut’s much-awaited film Thalaivi will be released in theaters on 10 September. Kangana Ranaut special episode will be telecast on this weekend.